Skip to content
October 16, 2019 ~ robertnemerson ~ Leave a comment
Great Falls Gaming Rendezvous was a blast!
Sure, the drive up there had a weather hiccough to it, but nothing I couldn’t handle. Although taking a leak behind the car in 15 degrees during a near whiteout was an interesting experience.
But, it was a great time with good folk, and the first time I was at a convention as an attending pro. My panels went well and good, and I was introduced to Steve Kenson (which was a cool thing), so it was a good time.
It was also the first convention that my partner Gillian went to, and our first convention together. We even skimmed Yellowstone on the way back home. We drove through Oregon, Idaho, Montana, and Wyoming over the course of the week, too.
Lastly, the Roadhouse Diner made for an awesome burger and fries dinner on Saturday night. Easily one of the better burgers that I’ve had.
Damn good trip. 🙂
June 11, 2018 ~ robertnemerson ~ Leave a comment

…and it was cool to finally make it to an even-numbered year PaizoCon.

Seriously, I’ve been going since 2009, although potentially I was suppose to make the 2008 inception (thus the start of the “curse”), yet I’ve never(until now) made it to an even-numbered event.

I’ve had plans go sideways economically, I’ve had roommates bail at the last second, and other such fun.

This year, however, was the inverse of that luck. I’d made it to OrcaCon 2018, and I thought that’d be my convention for the year. One and done, and done early.

But, it’s been a fair enough start to my year freelancing-wise and suddenly I could afford to go to PaizoCon.

It was all solo, mind you. I didn’t get to plan it right and do it with a roommate, which I’ll try to avoid next year.

Sure, I enjoy the privacy of having a room just to me. But, that’s a luxury I can’t often afford.

That said, PaizoCon was terrific. It’s still an affable, small convention. Thankfully. To the best of my knowledge there were no issues this year, again thankfully. I ain’t one to suffer much at a convention, but I’ve a solid sense of empathy so I don’t like it when others suffer unduly either.

I was walking with a cane this year, which is a recent change due to my back having utterly crapped out on me. I did okay, and only had a couple embarrassing moments, but folks at the convention were right kind and helpful about it.

Seriously, taking a tumble and having folks not only catch you, but help you up, is a humbling thing. Kind, too, but humbling.

I actually played Pathfinder this time, but only the Beta via the Delve and via a PFS Playtest. The Delve was with Stephen Radney-MacFarland running and it was a blast. The PFS bit was with Lyz Liddell, and it was a helluva way to kick off the convention.

I also managed to play some Starfinder, also via the Delve. Once with Adrian Ng, and the second time with Jason Keeley. Both were enjoyable times, and it was fun seeing Jason Keeley run in person.

All the seminars were good, including the Glass Cannon Podcast bit. I enjoy watching live streams of gaming, but I never thought I’d enjoy it in person…but I did.

I was also in a Known Direction seminar, and it was quite enjoyable.

I had a good time at the various creation-type seminars for Starfinder stuff, especially the one making a monster (of course).

All in all it was a good time, and a great social con. I didn’t get to see as many folks as I’d have liked, as it’s just big enough now that that can happen. But, I enjoyed the time with those I could manage to see.

My freelance networking was…well, we all know that I harp on myself about not being good at self-promotion. So, I handed out some cards, chit chatted, and that was that. I hung out with Christen and his spouse James, even hit a group dinner with them, which was cool.

It never fails, if I’m given enough time to ruminant I’ll get stuck in a quagmire of contemplation and reflection that has me rethinking everything I’ve done or want to do.

It’s partially why I like to keep something on my “plate,” so to speak, because it helps keep my focus.

Lulls, well they just beg me to look at how I do things, at how I could do things, and if I should change them. Rabbit holes and “What If” chains that lead down infinite corridors that are both solitary, yet interconnected.

It’s all the worse when I’m thinking of doing something new, something I’ve not done before, because I tend to overthink things before I do them. Think Thanking ideas via an inner monologue, pretend conversations, most of which shred my ideas like so much pulled pork.

Most creatives suffer this, mind you. It ain’t special to me. Everyone has their own difference, but we all do it. Sometimes cripplingly so.

My first game was on the Thursday night before PaizoCon, where I played in Erik Scott de Bie’s “Escape from Leuther” using Robert J. Schwalb’s Shadow of the Demon Lord in a homebrew based on Erik’s The World of Ruin series.

It was a blast, and not only did I get to play in my first game of Shadow of the Demon Lord, but I also made some new friends thanks to the other folks Erik invited.

Next up was my first PaizoCon game on Friday, where someone was running “The Curious Case of Tom Mallard” using Monte Cook Games’ The Strange by Bruce Cordell. Once more, a good time was had.

On Saturday I played in “Shadowed Plains”, also for The Strange, but it was a bit hectic. There were good folk, and fun was had, but it wasn’t up to the snuff of the prior two games.

Sunday would change for the better, though. I played in “Pressured Not to Land” which was set in Monte Cook Games’ Numenera, and later on in the day I played in “The Thanex Caper” in Legendary Games’ Legendary Planets setting. It was run by Jason Eric Nelson, and it was easily the best game of the convention and tied for best game of my vacation.

Also, Alistair John Riggs is a glorious beast when it comes to getting into character of the pregen he was playing. It was almost like we were all trying to play up to his level of nuttery.

Outside of the games, there were plenty of seminars, the preview banquet, and unofficial and official gatherings out the wazoo. Seriously, I was handing out my cards, talking with folk, eating good eats, and generally being a sociable opposite of my normal self.

As always, I highly recommend PaizoCon to folks who support Paizo, or who just like having a Memorial Day Weekend convention in the Seattle area. 😉

Now I never really planned for it to be this way, but I tend to only get to PaizoCon during an odd-numbered year.

As luck would have it, though, it’s an odd-numbered year and I’ll be at PaizoCon this coming Thursday. I’m quite excited, too.

Thanks to my friend Russ Taylor, I’ll have a roommate this year and I’ll actually be staying onsite. It’s also the PaizoCon before Starfinder releases, and I cannot wait to see what all we get to peak at during the convention.

I doubt I’ll be updating a lot while at PaizoCon, but if I can it’ll either be here or on my Freelancer page or on Red Cone Press.

The last few years have had their ups and downs, and 2016’s pendulum swung wider than prior years.

On the downside of the year, there was loss on a personally and professional level, as a good friend passed away unexpectedly and the so-called “new normal” stands out still. But, as it is with loss, you just have to remember the good and move forward.

On the upside, it was a year of new projects with new folks, which is always nice. I did some design work with the folks from Monte Cooke Games on “The Coming of the Hex,” and it was a blast. I also did some editorial work on a project for Everyman Gaming on the “Dynastic Races Compendium” that I was really proud of.

There was also a new personal endeavor of mine started last year, although it’s still in the nascent stages. I formed my own small press company, Red Cone Press, that will be supporting various systems with projects that are my own execution and ideas. At the moment I’m planning to support the Cypher System, D&D 5th Edition, and Starfinder. There might be a smattering of other systems, here and there, but those are the main ones right now.

Red Cone Press has been in the planning since Spring of 2016, as I wanted to do my own projects for my own reasons and see if folks liked them. It’s also a chance to be my own boss, and see how things turn out.

So here’s to 2017, interesting times to say the least. 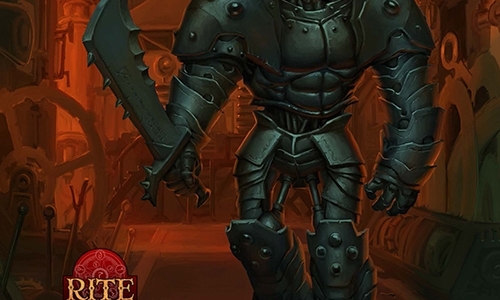 Another day, another product that I edited hits the ‘street,’ so to speak.

Rite Publishing’s The Secrets of the Iron Titan is available for purchase and seems to be doing quite well.

It’s an enjoyable piece which adds a class that covers a lot of common tropes and familiar types of constructs as player character options in Pathfinder Compatible campaigns.

It’s definitely pushing the nostalgia button firmly for some of us, but in a very nice way.